September 27th a date the metal world won’t ever forget Thirty years ago today I was at home and it was a Saturday.  I got a call from my old friend Dave Marrs.  Dave had been an original member of the Metallica road crew from the first No Life 'Til Leather demo-era shows through the Ride The LightningTour.  I had not talked to him in awhile.  I was surprised he was calling me.

The next day I went and got the Sunday San Francisco Chronicle hoping there might be some mention of Cliff in the major hometown paper... and in the bottom corner of the general news section was this: 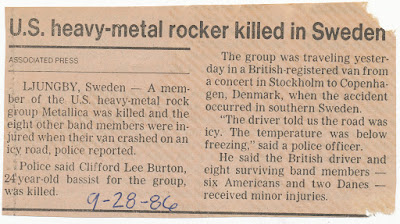 Damn, Cliff... 30 years!?  The first time I saw you play was when your old band Trauma supported Saxon at The Keystone Palo Alto.  I was up against the stage and when you were walking offstage I said something like "Great set!" and you looked down and thanked me.  Nine months later I met you before your first rehearsal with the new band and when the Danish drummer introduced us you said something like "I've been told about you!"

Around a year after this we were at The Keystone Berkeley and Trauma were supporting Exodus.  When your old band played we both went to the front of the stage, because hardly anyone else was there yet, and we banged our heads practically by ourselves to your old bandmates.  You treated me like a friend from the first moment I met you... and I always appreciated how you treated me like a friend after that... even though I was just the nerdy Metalhead who wrote for those fanzines.

Anyway, cheers Cliff.  You will always be the Major Rager on the 4-String Motherfucker. The band's setlist that afternoon was: